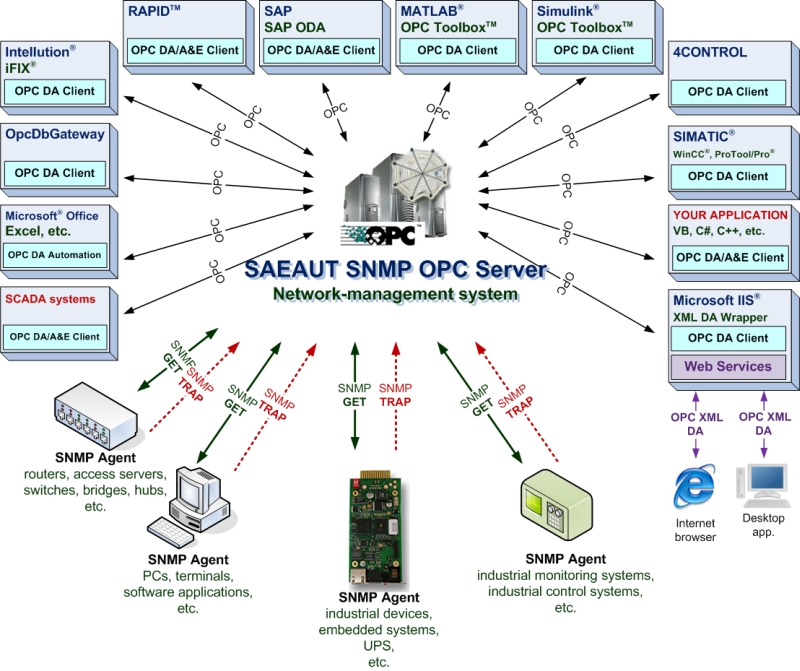 A large part of being a system administrator is collecting accurate information about your servers and infrastructure. There are a number of tools and options for gathering and processing this type of information. Many of them are built upon a technology called SNMP.

SNMP stands for simple network management protocol. It is a way that servers can share information about their current state, and also a channel through which an administer can modify span-defined values. While the protocol itself is very simple, the structure of programs that implement SNMP can be very complex.

In this guide, we will introduce you to the basics of the SNMP protocol. We will go over its uses, the way that the protocol is typically used in a network, the differences in its protocol versions, and more.

SNMP is a protocol that is implemented on the application layer of the networking stack (click here to learn about networking layers). The protocol was created as a way of gathering information from very different systems in a consistent manner. Although it can be used in connection to a diverse array of systems, the method of querying information and the paths to the relevant information are standardized.

There are multiple versions of the SNMP protocol, and many networked hardware devices implement some form of SNMP access. The most widely used version is SNMPv1, but it is in many ways insecure. Its popularity largely stems from its ubiquity and long time in the wild. Unless you have a b reason not to, we recommend you use SNMPv3, which provides more advanced security features.

In general, a network being profiled by SNMP will mainly consist of devices containing SNMP agents. An agent is a program that can gather information about a piece of hardware, organize it into predefined entries, and respond to queries using the SNMP protocol.

The component of this model that queries agents for information is called an SNMP manager. These machines generally have data about all of the SNMP-enabled devices in their network and can issue requests to gather information and set certain properties.

The manager can be any machine that can send query requests to SNMP agents with the correct credentials. Sometimes, this is implemented as part of a monitoring suite, while other times this is an administrator using some simple utilities to craft a quick request.

SNMP agents do the bulk of the work. They are responsible for gathering information about the local system and storing them in a format that can be queried.updating a database called the “management information base”, or MIB.

The MIB is a hierarchical, span-defined structure that stores information that can be queried or set. This is available to well-formed SNMP requests originating from a host that has authenticated with the correct credentials (an SNMP manager).

The agent computer configures which managers should have access to its information. It can also act as an intermediary to report information on devices it can connect to that are not configured for SNMP traffic. This provides a lot of flexibility in getting your components online and SNMP accessible.

SNMP agents respond to most of the commands defined by the protocol. These include GetRequest, GetNextRequest, GetBulkRequest, SetRequest and InformRequest. In addition, an agent is designed to send Trap messages.

Understanding the Management Information Base

The most difficult part of the SNMP system to understand is probably the MIB, or management information base. The MIB is a database that follows a standard that the manager and agents adhere to. It is a hierarchical structure that, in many areas, is globally standardized, but also flexible enough to allow vendor-specific additions.

The MIB structure is best understood as a top-down hierarchical tree. Each branch that forks off is labeled with both an identifying number (starting with 1) and an identifying string that are unique for that level of the hierarchy. You can use the strings and numbers interchangeably.

To refer to a specific node of the tree, you must trace the path from the unnamed root of the tree to the node in question. The lineage of its parent IDs (numbers or strings) are strung together, starting with the most general, to form an address. Each junction in the hierarchy is represented by a dot in this notation, so that the address ends up being a series of ID strings or numbers separated by dots. This entire address is known as an object identifier, or OID.

Hardware vendors that embed SNMP agents in their devices sometimes implement custom branches with their own fields and data points. However, there are standard MIB branches that are well defined and can be used by any device.

The standard branches we will be discussing will all be under the same parent branch structure. This branch defines information that adheres to the MIB-2 specification, which is a revised standard for compliant devices.

The base path to this branch is:


The section 1.3.6.1 or iso.org.dod.internet is the OID that defines internet resources. The 2 or mgmtthat follows in our base path is for a management subcategory. The 1 or mib-2 under that defines the MIB-2 specification.

This is a great resource for familiarizing yourself with the MIB tree. This particular page represents the connecting nodes at the junction we have been talking about. You can check what is further up and down the tree by checking out the “superior” and “subsidiary” references respectively.

Another similar tool is a SNMP Object Navigator provided by Cisco. This can be used to drill down into the hierarchy to find information you need. A similar tree is provided by SolarWinds.

Basically, if we want to query our devices for information, most of the paths will begin with 1.3.6.1.2.1. You can browse the tree interfaces to learn what kind of information is available to query and set.

One of the reasons that SNMP has seen such heavy adoption is the simplicity of the commands available. There are very few operations to implement or remember, but they are flexible enough to address the utility requirements of the protocol.

The following PDUs, or protocol data units, describe the exact messaging types that are allowed by the protocol:

With these seven data unit types, SNMP is capable of querying for and sending information about your networked devices.

The SNMP protocol has gone through many changes since it was first introduced. The initial spec was formulated with RFC 1065, 1066, and 1067 in 1988. By the simple fact that it has been around so long, this version is still widely supported. However, there are many security issues with the protocol, including authenticating in plain text, so its use is highly discouraged, especially when used on unprotected networks.

Work on version 2 of the protocol was initiated in 1993 and offers some substantial improvements on the earlier standard. Included in this version was a new “party-based” security model meant to address the security issues inherent with the prior revision. However, the new model was not very popular because it was difficult to understand and implement.

Because of this, a few “spin-offs” of version 2 were created, each of which kept the bulk of the version 2 improvements, but swapped out the security model. In SNMPv2c, community-based authentication, the same model used in v1, was reintroduced. This was the most popular version of the v2 protocol. Another implementation, called SNMPv2u, uses user-based security, although this was never very popular. This allowed for per-user authentication settings.

In 1998, the third (and current) version of the SNMP protocol entered as a spec proposal. From a user’s perspective, the most relevant change was the adoption of a user-based security system. It allows you to set a user’s authentication requirements as one of these models:

In addition to authentication, an access control mechanism was implemented to provide granular control over which branches a user can access. Version 3 also has the ability to leverage the security provided by the transport protocols, such as SSH or TLS.