10 Core Concepts that Every Windows Network Administrator Must Know

Recently a relative of mine went for a job interview as a security analyst. She was asked a number of technical questions in the interview but the ones that she struggles with the most were the networking questions (as she had not used or studies networking in some time). I thought that this article might be helpful for Windows Network Admins out there who need some “brush-up tips” as well as those who are interviewing for network admins jobs to come up with a list of 10 networking concepts that every network admin should know.

So, here is my list of 10 core networking concepts that every Windows Network Administrator must know:

The domain naming system (DNS) is a cornerstone of every network infrastructure. DNS maps IP addresses to names and names to IP addresses (forward and reverse respectively). Thus, when you go to a web-page like www.windowsnetworking.com, without DNS, that name would not be resolved to an IP address and you would not see the web page. Thus, if DNS is not working “nothing is working” for the end users.

When you perform a ping, you can easily see that the domain name is resolved to an IP (shown in Figure 2).

Ethernet is the protocol for your local area network (LAN). You have Ethernet network interface cards (NIC) connected to Ethernet cables, running to Ethernet switches which connect everything together. Without a “link light” on the NIC and the switch, nothing is going to work.

Every computer on a network must have a unique Layer 3 address called an IP address. IP addresses are 4 numbers separated by 3 periods like 1.1.1.1.

Most computers receive their IP address, subnet mask, default gateway, and DNS servers from a DHCP server. Of course, to receive that information, your computer must first have network connectivity (a link light on the NIC and switch) and must be configured for DHCP.

You can see my computer’s IP address in Figure 1 where it says IPv4 Address 10.0.1.107. You can also see that I received it via DHCP where it says DHCP Enabled YES.

Larger blocks of IP addresses are broken down into smaller blocks of IP addresses and this is called IP subnetting. I am not going to go into how to do it and you do not need to know how to do it from memory either (unless you are sitting for a certification exam) because you can use an IP subnet calculator, downloaded from the Internet, for free. 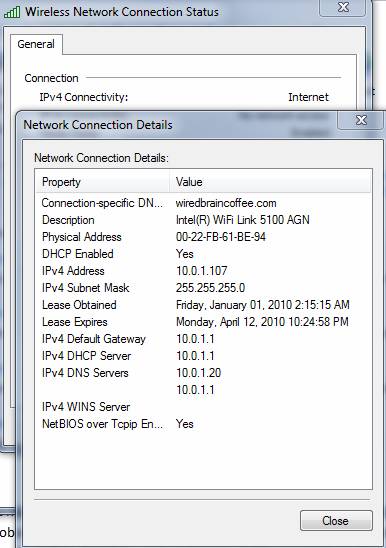 In Figure 2, you can see that we are using private IP addresses because the IP starts with “10”. It is my integrated router/wireless/firewall/switch device that is performing NAT and translating my private IP to my public Internet IP that my router was assigned from my ISP.

Protecting your network from malicious attackers are firewalls. You have software firewalls on your Windows PC or server and you have hardware firewalls inside your router or dedicated appliances. You can think of firewalls as traffic cops that only allow certain types of traffic in that should be in.

For more information on Firewalls, checkout our Firewall articles.

Your local area network (LAN) is usually contained within your building. It may or may not be just one IP subnet. Your LAN is connected by Ethernet switches and you do not need a router for the LAN to function. So, remember, your LAN is “local”.

Your wide area network (WAN) is a “big network” that your LAN is attached to. The Internet is a humongous global WAN. However, most large companies have their own private WAN. WANs span multiple cities, states, countries, and continents. WANs are connected by routers.

On small home networks, you can have an integrated router that also offers firewall, multi-port switch, and wireless access point.

Switches work at layer 2 of the OSI model and connect all the devices on the LAN. Switches switch frames based on the destination MAC address for that frame. Switches come in all sizes from small home integrated router/switch/firewall/wireless devices, all the way to very large Cisco Catalyst 6500 series switches.

One of the core networking concepts is the OSI Model. This is a theoretical model that defines how the various networking protocols, which work at different layers of the model, work together to accomplish communication across a network (like the Internet).

Unlike most of the other concepts above, the OSI model isn’t something that network admins use every day. The OSI model is for those seeking certifications like the Cisco CCNA or when taking some of the Microsoft networking certification tests. OR, if you have an over-zealous interviewer who really wants to quiz you.

To fulfill those wanting to quiz you, here is the OSI model:

At this point, let me stop degrading the value of the OSI model because, even though it is theoretical, it is critical that network admins understand and be able to visualize how every piece of data on the network travels down, then back up this model. And how, at every layer of the OSI model, all the data from the layer above is encapsulated by the layer below with the additional data from that layer. And, in reverse, as the data travels back up the layer, the data is de-encapsulated.

By understanding this model and how the hardware and software fit together to make a network (like the Internet or your local LAN) work, you can much more efficiently troubleshoot any network. For more information on using the OSI model to troubleshoot a network, see my articles Choose a network troubleshooting methodology and How to use the OSI Model to Troubleshoot Networks.

For more information on the OSI Model, here are some resources to checkout: